If you haven’t heard of Litecoin, you may have heard of Bitcoin. If not then you’ve been missing out in a big way!

Litecoin is a peer to peer internet currency with instant transactions to anyone across the world with very low to zero processing fees, regardless of size. Litecoin is decentralized which means it has no connection with any banks or governments, which is part of what makes it so intriguing to the technologically inclined population. It is instead dependent on a network of users that run it peer to peer style. It works by users running “mining” software and hardware to process extensive transaction algorithms in exchange for a small reward every so often, but we will dive into the mining aspect further down.

Litecoin has a finite supply of coins which are being drip fed into the network, with a cap of 84 million coins, compared to Bitcoin’s 21 million cap.

Litecoin has a much faster confirmation time at 2.5 minutes, where Bitcoin is up around 10 minutes which is another reason LTC is becoming increasingly popular.

You start by downloading a wallet software, at which point will give you your first Litecoin address. This address is usually a string of random characters like (RWCDCSmIUTFyU2GJxs6MD7ipSrGtSqZREW) which is where your coins are stored. This wallet or address works similar to how an e-mail address works sending and receiving e-mails, but instead you’re sending and receiving Litecoins. You can make additional address anytime and name them whatever you want. 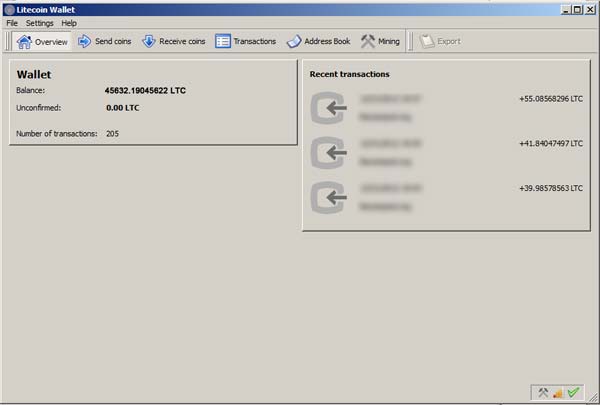 How Safe Is It?

Think of a block chain as a large public transaction log thats shared across the network. Every single confirmed transaction gets added to this block chain no matter what. This ensures new transactions are being verified properly making sure the coins are coming from an authorized sender. The block chains are chronologically ordered and protected with cryptography. Still not sure about all of this? Keep reading…

A Litecoin transaction is considered as a transfer of value between Litecoin addresses, which as mention above must be included into the block chain to be verified. Each Litecoin wallet has a secret piece of data referred to as a private key. These keys are whats used to sign transactions, providing mathematical proof that the coins are coming from the right owner of the address. This private key also prevents the transaction from being altered once it has been issued. Every Litecoin transaction gets broadcasted to users and confirmed by the network within 2.5 minutes through the process of mining.

Mining is the process of users connected to a network to confirm transactions. The network consists of users using GPU’s (video cards) to process these mathematical algorithms incredibly fast. You may ask who these “users” are and what incentive do they have to dedicate their computer to this network? Well that will all be explained in my extensive Litecoin mining tutorial. This is a very vague description of how Litecoin mining actually works. If you wish to read more on mining, I will be adding an extensive article on in and add a link to it right here so stay tuned for that.

Where To Get Litecoins

The most popular place to buy Litecoins right now is at http://btc-e.com. The currenct value of 1 LTC is $2.50 USD. Many people have been treating the currency like a stock, buying coins and hoping for a value increase which has been a solid strategy over the past year. When first introduced back in August 2012, LTC was worth just a few cents, and just recently in early April sky rocketed to a few dollars worth.